Editor's note: CNN Contributor Roland Martin has listened to several of the sermons of Rev. Jeremiah Wright from Trinity United Church of Christ in Chicago. Portions of the sermons have been excerpted in recent stories.

As this whole sordid episode regarding the sermons of the Rev. Jeremiah Wright has played out over the last week, I wanted to understand what he ACTUALLY said in this speech. I've been saying all week on CNN that context is important, and I just wanted to know what the heck is going on.

I have now actually listened to the sermon Rev. Wright gave after September 11 titled, "The Day of Jerusalem's Fall." It was delivered on Sept. 16, 2001. 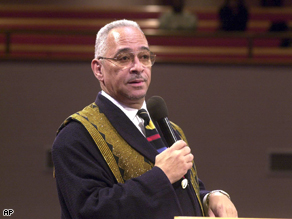 One of the most controversial statements in this sermon was when he mentioned "chickens coming home to roost." He was actually quoting Edward Peck, former U.S. Ambassador to Iraq and deputy director of President Reagan's terrorism task force, who was speaking on FOX News. That's what he told the congregation.

He was quoting Peck as saying that America's foreign policy has put the nation in peril:

"I heard Ambassador Peck on an interview yesterday did anybody else see or hear him? He was on FOX News, this is a white man, and he was upsetting the FOX News commentators to no end, he pointed out, a white man, an ambassador, he pointed out that what Malcolm X said when he was silenced by Elijah Mohammad was in fact true, he said Americas chickens, are coming home to roost.”

"We took this country by terror away from the Sioux, the Apache, Arikara, the Comanche, the Arapaho, the Navajo. Terrorism.

"We took Africans away from their country to build our way of ease and kept them enslaved and living in fear. Terrorism.

"We bombed the black civilian community of Panama with stealth bombers and killed unarmed teenage and toddlers, pregnant mothers and hard working fathers.

"We bombed Qaddafi's home, and killed his child. Blessed are they who bash your children's head against the rock.

"We bombed Iraq. We killed unarmed civilians trying to make a living. We bombed a plant in Sudan to pay back for the attack on our embassy, killed hundreds of hard working people, mothers and fathers who left home to go that day not knowing that they'd never get back home.

"We bombed Hiroshima. We bombed Nagasaki, and we nuked far more than the thousands in New York and the Pentagon and we never batted an eye.

"Kids playing in the playground. Mothers picking up children after school. Civilians, not soldiers, people just trying to make it day by day.

"We have supported state terrorism against the Palestinians and black South Africans, and now we are indignant because the stuff that we have done overseas is now brought right back into our own front yards. America's chickens are coming home to roost.

"Violence begets violence. Hatred begets hatred. And terrorism begets terrorism. A white ambassador said that y'all, not a black militant. Not a reverend who preaches about racism. An ambassador whose eyes are wide open and who is trying to get us to wake up and move away from this dangerous precipice upon which we are now poised. The ambassador said the people we have wounded don't have the military capability we have. But they do have individuals who are willing to die and take thousands with them. And we need to come to grips with that."

He went on to describe seeing the photos of the aftermath of 9/11 because he was in Newark, N.J., when the planes struck. After turning on the TV and seeing the second plane slam into one of the twin towers, he spoke passionately about what if you never got a chance to say hello to your family again.

"What is the state of your family?" he asked.

And then he told his congregation that he loved them and asked the church to tell each other they loved themselves.

1. This is a time for self-examination of ourselves and our families.

2. This is a time for social transformation (then he went on to say they won't put me on PBS or national cable for what I'm about to say. Talk about prophetic!)

"We have got to change the way we have been doing things as a society," he said.

Wright then said we can't stop messing over people and thinking they can't touch us. He said we may need to declare war on racism, injustice, and greed, instead of war on other countries.

3. This is time to tell God thank you for all that he has provided and that he gave him and others another chance to do His will.

By the way, nowhere in this sermon did he said "God damn America." I'm not sure which sermon that came from.

This doesn't explain anything away, nor does it absolve Wright of using the N-word, but what it does do is add an accurate perspective to this conversation.

The point that I have always made as a journalist is that our job is to seek the truth, and not the partial truth.

I am also listening to the other sermons delivered by Rev. Wright that have been the subject of controversy.

And let me be clear: Where I believe he was wrong and not justified in what he said based upon the facts, I will say so. But where the facts support his argument, that will also be said.

Editor's note: Read other blogs from Roland Martin and the team of 360 contributors at CNN.com/360