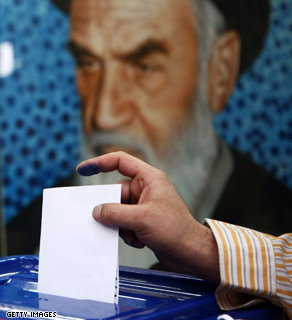 An Iranian man casts his vote in the parliamentary elections on March 14 in Tehran, Iran. Iranians have begun to vote in elections in which reformist opposition have been barred from running against President Mahmoud Ahmadinejad.

As the three remaining presidential candidates begin staking out their positions on important foreign policy issues facing the country, each will have to explain how they plan to deal with an increasingly powerful, increasing belligerent Iran.

It is no exaggeration to say that America's relations with the Islamic Republic hinges on who will be the next president and commander in chief.

Iran is having an election, too. But unlike the primary season in the United States, Iranians do not support the ballot choices offered to them by the regime of the Islamic Republic.

A new nationwide public opinion survey of Iran conducted by Terror Free Tomorrow and D3 Systems shows widespread disillusionment with the candidates running in the Parliamentary elections on March 14.  When asked which candidates they plan on supporting – whether Reformists or Conservatives – a third of Iranians replied "neither," while a quarter said they do not know.

Only 8% said they would vote for the Conservatives; 22% for the Reformists.

More significantly, the vision of the Iranian people for a more open and fully democratic system of government remains strong.  86% of those surveyed said that they support a political system in which all of Iran's leaders, including the Supreme Leader, would be chosen by a free and direct vote of the people.

The power and role of the Supreme Leader is at the core of the Islamic Republic because it is the Supreme Leader, Ayatollah Ali Khamenei, and not President Ahmadinejad, who exercises ultimate authority.  Yet the survey found that almost nine in ten want the most powerful official in Iran to be held accountable to the voters.

Indeed, apart from the economy, the indicia of democratic governance of ensuring free elections and a free press are the most important long-term goals Iranians have for their government.

The poll also proved once again that the Iranian people yearn for a more democratic future with closer ties to the U.S. More than three-quarters of Iranians back normalizing relations with the United States, and 71% want to work with the U.S. to help resolve the Iraq war. 70% are also in favor of providing full inspections to nuclear sites and a guarantee not to develop nuclear weapons in return for outside aid and investment.

At the same time, however, Iranians are becoming increasingly impatient with American foreign policy toward their country.  When a similar poll was conducted by Terror Free Tomorrow/D3 in June 2007, it found that Iranians were far more supportive of offering concessions to the United States in return for normalized relations than they appear to be today.  Moreover, Iranians who believe developing nuclear weapons is "not at all important" has dropped from one-third in June to only one-fifth today.

In good news for President Ahmadinejad, Iranians are growing ever more confident in his handling of the economy.  Nearly half of those surveyed believed Ahmadinejad's policies have succeeded in reducing unemployment and inflation, while 42% believe the Iranian economy is headed in the right direction.  In June, that number stood at only 27%.

These are dangerous trends.  Iran is at a pivotal moment in its history. Despite the regime's constant vilifying of the United States (or perhaps because of it), the Iranian people continue to look to the U.S. as a beacon of political freedom and economic opportunity.  Iranian youth in particular, who make up some two-thirds of the population, yearn for the same rights and freedoms they see in other parts of the world when they turn on their satellite televisions or log on to the Internet.

The next American President will inherit an Iranian portfolio that has remained more or less unchanged, and ineffective, for three decades.  Now is the time for a new policy that supports the Iranian people without linking Iranian opposition groups to the U.S., that furthers constructive engagement without unduly empowering regime hardliners.  While these steps are undoubtedly difficult to balance, for most of the Cold War, they provided the cornerstone of American policy toward the Soviet Union.

As President Reagan told us, America's greatest ally against the Soviet Union in winning the Cold War was the average Soviet, "Citizen Ivan," Reagan said.  The new TFT survey shows this is no less true with Iran today.