Can Cindy McCain really be that perfect? 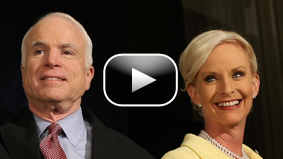 She’s always dressed in a killer suit and never has a hair out of place. We went to Phoenix, where Cindy McCain grew up, to talk with those who know her best. Good friend Betsy Bayless, a former Arizona secretary of state, says Cindy is a “fun down to earth person with a great sense of humor.”

She had a privileged upbringing. Her father started one of the largest beer distributorships in the country and today Cindy is the Chairman of the Board. The company is reportedly worth hundreds of millions of dollars. Cindy graduated from the University of Southern California with a teaching degree and went on to become a teacher, but meeting John McCain changed all that. They met before he was in politics at a cocktail party in Hawaii. He is 18 years older than she is.

They apparently had instant chemistry. John was separated from his first wife at the time.  About a month after his divorce, Cindy and John McCain got married.

They had three children and adopted a fourth child from Bangladesh. That adoption got attention during the 2000 primary in South Carolina, Sen. McCain’s first run to be president. There were claims Bridget was actually McCain’s illegitimate black child.  That’s not true – that’s dirty politics.

The McCains had another negative story to deal with during that campaign.  During that 2000 primary, she was painted as a drug addict. It wasn’t pretty.

Here’s the back-story: In 1989, Cindy had a bad car accident and started taking prescription pain killers for her back injury. Four years later, she was still addicted to pain killers. Friends say her mother confronted her and she admitted her addiction, then immediately stopped taking the pills.

So now the McCain’s are at it again. Cindy seems more relaxed this time around and seems to be having more fun, according to the blog that McCain’s daughter Meghan keeps from the campaign trail.

Still, she hasn’t forgotten what happened back in 2000. In fact, friends say she kept a “grudge list.”

– Randi Kaye, 360° Correspondent Editors note: The feedback has been immense. Please be sure to watch the full report airing tonight on 360° at 10p ET