Spinning out in snowed-in Texas and flooded Ohio

I cannot tarry today ...very busy building an ark so we can get out of Columbus when the time comes.

Ketchup for those of you who have a life. 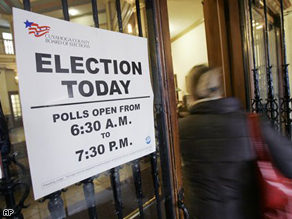 Wowsie, did we have a rough and tumble three days or what.  Obama got hit with:

a) his long relationship with a land developer on trial for corruption - the trial opened Monday. Timing is all, dear reader, timing really is all.

b) a memo suggesting his economic adviser told the Canadians that Obama doesn't actually mean his criticism of free trade deals.  (Death, and I mean DEATH in Ohio)

And 3) Clinton ads beating him over the head for being a subcommittee chair with jurisdiction over U.S. policy in Afghanistan and not holding a single meeting.  Smiles all around in Camp Clinton.

And for all my friends calling–honest, i don't know what's going to happen. I have a better feeling for this one, but I’m not sharing.. That way I sound really smart tomorrow morning when I say..well, EXACTLY, I knew it all along.

I do know the wednesday morning spin:

She wins Texas and Ohio, and argues that what with all that money and all that momentum and all those ads, Obama couldn't pull it off, therefore voters are having buyer’s remorse... and that she has won north, south, east and west states, showing her broad appeal, and has won all the big states Dems need to win general elections....

DIGRESSION: I don't get that last part.. She thinks because she won primaries in New York and Massachussets, those states will go Republican in the general if Obama's the nominee?  I see pigs flying.

If he loses both states, he argues (as both campaigns think is likely) that he still has the most pledged delegates and that he once had double digit deficits in both Ohio and Texas and the states knew her better and the demographics favored her and really really isn't it amazing how much he closed the gap in so little time.

Then they go battle in Wyoming, (caucuses March 8th) where the campaign will feature sitting around the table with the 6 Democrats who actually live in Wyoming.  Kidding, Wyoming Democratic Party..  I KNOW your Gov is a Democrat. But it's been more than 4 decades since a Democratic presidential nominee won the state.. Just sayin', there's more work to do...

She loses one or the other, and can no longer argue that she wins the big states.  And he says hey, we won on her turf and we have the most pledged delgates and....maybe we don't go to Wyoming.

Shout out Rhode Island and Vermont:  we know you're there and Camp Obama is already suggesting they may pick up more (net) delegates in your states than she will pick up in Ohio.. We're watching.. Promise.

But for now-flooding and ice in Ohio..snow in Texas..elections in both?  There is an analogy in there somewhere.  With my perpetual sleep deprivation and caffeine immunity, I can't think of it, but something happenin' here..what it is ain't exactly clear. (plagiarized)