In tonight’s primaries: Mind the Gap

A year and a half ago, I hired a young graduate from Brown, Jeremy Haber, to become my research assistant.  He has quickly developed one of the finest eyes I have seen in politics, and as we await the verdicts of the voters today, I am paying increasing attention to his latest advice: "Watch the margins." 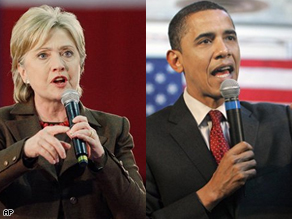 As Jeremy has figured out, the way Democrats award delegates will mean more than one might think in today's contests.  Hillary Clinton is now favored in Ohio, but if she were to win there by less than 5 points, she would likely only gain a few more delegates in the state than Obama does.  She has to win by 5 or more to harvest a sizable number of delegates - to cut into Obama's pledged delegate lead - and by all indications, that will be hard.

In contrast, the much smaller state of Vermont could net Barack Obama 5 additional delegates if he wins there by double digits.   And by all indications, he will.  That may not seem right to Hillary supporters - that Obama could benefit more from winning Vermont, than she will from winning Ohio - but under rules both sides have embraced, the margin of victory counts enormously in awarding delegates.

One of the reasons why Obama is ahead so far in elected delegates is that his team figured out the math, too.  As noted here earlier, Clinton beat him in the New Jersey primary on Super Tuesday but on that same night, she didn't really compete against him in the Idaho caucus and he swept to a big victory there.  Net result: putting the two states together, Obama actually came out ahead in delegate count!

I have been telling Jeremy that psychology can often trump math, so that if Hillary wins the popular vote in both Ohio and Texas tonight - and election-eve polls say she is gaining traction in both  - the fact that she won will be a huge story that will restore her campaign in the popular mind (and in the press).

But he is right to caution, "Watch the margins," because if Hillary were to win by only a tiny fraction, she won't get much help in the delegate count.  Indeed, Barack could still end the evening with a bigger delegate haul.  If so, that will count for more and more as the race moves on to states like Wyoming and Mississippi, where he is strong.

My eye will still be trained first and foremost tonight on who wins the popular vote in the four states.  But my next question will be: by how much?

A final note: Hillary Clinton's supporters have every reason to go into today with their hopes up again. She has waged an aggressive and apparently successful campaign in these closing hours. Yet Barack Obama's supporters also have reason to be optimistic today: his crowds are still huge and boisterous, and since Super Tuesday a month ago, he has always done better in the final voting than the final polls.  As the man said, "crunch time."