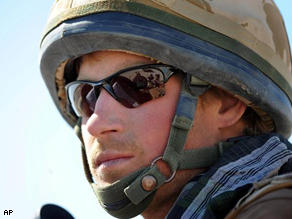 They are the men and women of the U.S. military currently in Afghanistan.

Many are in combat and on the front lines. But as CNN’s Nic Robertson explained to Anderson last night, the front lines are practically everywhere in that war-torn nation.

Media outlets around the world are transfixed on the Harry story. News organizations, including CNN, continue to report on his mission. It is a story worth telling. He is a public figure. A royal one.

At the same time, this is also a good reality check.

Harry may not want to go home. But he is.

You can also be sure our heroes also want to return to the states, to see their children, their families, their friends.

But they cannot. Not yet.

We may not have a throne, but we are a country with princes and princesses, kings and queens.

And they are serving our nation right now.