I first saw the news on a website popular amongst us media types this morning:  “Web Exclusive: Prince Harry is fighting the front lines in Afghanistan.” 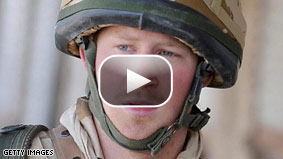 I was shocked and my first thought was about the safety of the troops serving with him.  Gen. Sir Richard Dannatt, the head of the British Army, released a statement today saying:

"It was my judgement that with an understanding with the media not to broadcast his whereabouts, the risk in (deploying him to Afghanistan) was manageable. Now that the story is in the public domain, the Chief of Defence Staff and I will take advice from the operational commanders about whether his deployment can continue."

He also said,"I am very disappointed that foreign Web sites have decided to run this
story without consulting us."

What do you think? Was the website right in reporting this today? Was the safety of Prince Harry and his fellow soldiers compromised?

On 360° tonight, Nic Robertson will have the latest on this story, including an interview with Prince Harry and exclusive access to him on the front lines.