Nader on his campaign: It’s a No Brainer

The majority of Americans want a:

-single payer
-medicare for all
-canadian style
-health care system (with freedom of choice of doctors and hospitals).

The majority of the American people support single payer. 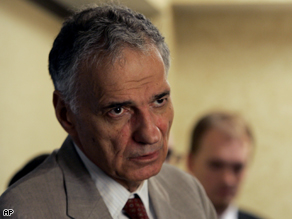 I also support a crackdown on billing fraud and abuse – which the Government Accounting Office has estimated costs the nation about 10 percent of our entire healthcare bill – or over $220 billion year.

The health insurance industry, McCain, Clinton and Obama are opposed to single payer.

Under our current system, $350 billion a year goes to needless administrative expenses.

A single payer system is the only way to recover these wasted billions.

With these savings, we could provide Medicare for all.

Of course, the health insurance industry would lose excess profits.

But the American people would gain a state of the art, freedom of choice, life saving, trimmed down health care system.

It’s a no brainer.