Has gender been a factor in Hillary Clinton's presidential campaign?

It seems to me, the answer is an unequivocal "yes."  And not just because I've written a book called Why Women Should Rule the World, which comes out tomorrow.

Actually, the book isn't about Hillary Clinton, though I do mention her.  And it's not really a case for a woman president, though I think that would be great.  Rather it's an argument that more women in public life makes things better, not because women are the same as men, but often because of the ways they are different.  It's important to note here that my book isn't "anti-men." 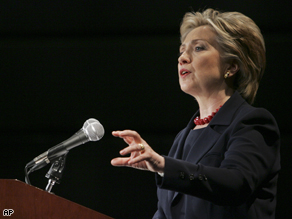 Empowering women strengthens the economy.  It makes our government more responsive.  It improves the quality of life for women, children and men.  In short, everybody wins.

But in making the case for more women, I also had to look at many of the reasons there are still so few in some places, from the physics lab, to the United States Senate.  Turns out, it isn't just the "glass ceiling," although a lot of women rise only to find their path to the top is blocked.  There are obstacles at every level, some of them external (women are still excluded from the informal networks that are essential to successful careers); some of them are biological (it's still tough to balancing big jobs and small children); and some of them are internal (women are often to reluctant to promote themselves).  All of them need to be addressed in order for women to contribute more.

But what about Hillary Clinton?  How has gender affected her campaign?  Lots of ways.  First, I think women have to do more to establish their bona fides, to prove to the world they are "qualified."

Don't get me wrong, I truly admire Barack Obama, and I think he's run one hell of a good campaign.  But does anyone really believe a woman with his resume could have gotten out of the starting gate?  Not me, not for a minute.

I also think that Hillary has gotten a much tougher press.  To be sure, not all of it is gender-related.  Other factors, including her husband and the adversarial relationship her campaign has built with reporters, have contributed.

But the truth is: you can still say almost anything about a woman, with no penalty.  When demonstrators at a Clinton rally shouted at her to "iron my shirt," there was no outrage.  When Rush Limbaugh mused about whether Americans wanted to watch a woman grow old before their eyes (as if men in the White House don't age), no one pushed back.  When a former Chief of Staff to the United States Air Force and a senior advisor to the Obama campaign was quoted saying undeniably sexist things about Hillary, the Obama campaign distanced itself from the remarks - but no one demanded the general be "fired."  And he wasn't.

When Hillary Clinton came from behind to win the New Hampshire in February, she became the first woman in American history to win a presidential primary, a fact that got lost in the historic sweep of Obama's campaign.  And I have no doubt that when the story of the 2008 campaign is written, gender will be an important theme.  Win or lose, Hillary's campaign has shown us the opportunities - and often, the obstacles - that gender still represents for women who want to be president.  And even though all the news isn't good, her candidacy will make it easier for other women to follow in her footsteps.