In Davos: The U.S. On a Downhill Slope

DAVOS, Switzerland (CNN) - It is unsettling these days to be an American at the World Economic Forum in Davos, Switzerland.

When I first started coming here about 15 years ago, the U.S. was the centerpiece of attention and respect.  Especially after the Cold War, we were seen as a benevolent hyper power. 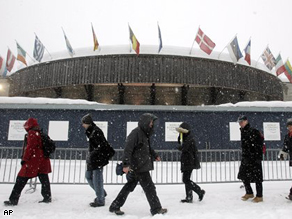 I remember vividly how Larry Summers, then a professor, argued that not since the days of ancient Rome had there been such a large gap between the most powerful society on earth versus the No. 2 - in economic, political, military and cultural influence. Where there was some definite resentment among some of the leaders on hand, the more general reaction was one of warmth.

One felt extremely proud to be a representative from the USA.

That view actually started to change before George W. Bush took office, as others around the world worried how governable we are. Still, the immediate reaction to 9/11 was an outpouring of support and sympathy - so strong that the founder of the forum, Klaus Schwab, moved the January 2002 sessions to New York City as a message of world solidarity with the U.S.

Never before or since has the World Economic Forum been held away from Davos.

Iraq brought a change here, just as it did in world opinion. The sessions just before and after the war started, touched off the greatest anger toward the United States that anyone can remember at Davos. It got pretty ugly in some sessions.  But the Europeans and others thought there must be a saving grace. Surely, they thought, the president is acting without much public support at home.

How wrong they were.

When Bush swept to a resounding re-election in 2004, the Davos of January, 2005 was one of pretty sullen resignation by delegates from other countries.

By 2006, the mood changed again: ok, if you are not going to lead well in America, we will have to start moving ahead without you. By 2007, China and India suddenly became the center of attention as people spoke in awe of their growth and crowded into sessions on "Whither Asia?"

Now this year, my observation is that people are following the election campaign closely but they are not at all optimistic that the U.S. is going to resume its world leadership role.  And there is far more despair here about the U.S. government's foot dragging on climate change than Iraq (fortunately, some U.S. CEOs like Jim Rogers of Duke Energy are much more aggressive in fighting carbon emissions than our government, so that helps in arguing that America may one day soon play a more responsible role on the environment.)

Overall, I would have to say, Asia is seen as the future here while there is a big, big question mark hanging over the U.S.

Does any of this matter? I think it does.

Davos brings together about 2,500 leaders from business, finance, government, the academy, journalism and the like. One can dismiss them as elites, but for better or for worse, elites do play a significant role in shaping the course of events.

If you believe, as I do, that it is critical to the future of the globe that the U.S. become once again a power to whom others turn with respect and for leadership, we need to pull ourselves back up.

We don't need to be the world's only superpower - we have to respect the right of others to share join leadership - but it will be a much more threatening world for our kids and grandkids if others rise and we continue on a downhill slope.